On the Rocks, an all-new standalone contemporary romance

by Kandi Steiner is LIVE!

Noah Becker is nothing but trouble.

That’s what Mama told me when I was a kid, kicking his pew in church and giggling at the games we’d play. It’s what the town said when his father died and the Becker brothers went wild.

And it’s on repeat in my mind the day I walk into the whiskey distillery where he works to buy a wedding gift for my fiance.

No matter how many times I repeat it, I can’t escape Noah in our small Tennessee town. And the more I run into him, the more he infuriates me. Because he sees what no one else does.

The me I’m not sure I’m allowed to be.

I’m Ruby Grace Barnett, the mayor’s daughter. Soon to be a politician’s wife, just like Mama and Daddy always wanted. Soon to fulfill my family’s legacy, just like I always knew I would.

Until the boy everyone warned me about makes me question everything, like whether the wedding I’m planning is one I even want.

Everyone said Noah Becker was nothing but trouble.

If only I had listened. 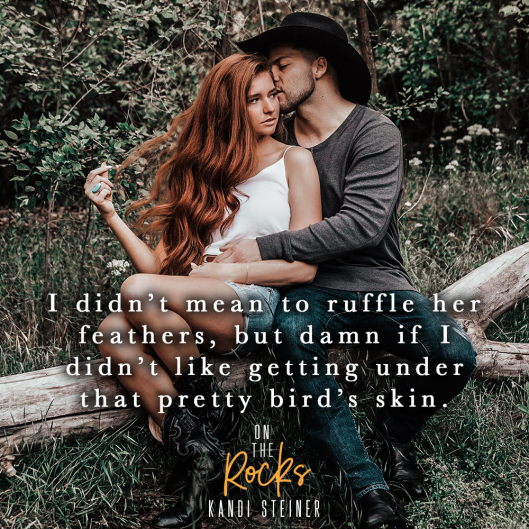 If you plan to purchase this book, we would be grateful if you used our links. This helps us maintain the blog and costs you nothing! Thank you for your support!

Download your copy today or read FREE in Kindle Unlimited!

I watched from the sidelines as Betty schooled Noah on the final dance scene from the classic movie – and one of her favorites. Noah, bless his heart, took it in stride. He held her hands, spun her gently, even went under water completely to give Betty some sort of “lift” that made her feel like Jennifer Grey.

That was when her smile was the largest – her eyes closed, face cast upward, arms out in the same iconic flight stance that the actress had done.

If I wasn’t laughing so hard, I might have cried at the sentiment.

After a dozen more run throughs, Betty called for a break, and the two of them swam up to the side of the pool where I sat. Betty took the lemonade I offered her, sipping and hollering across the pool at Mr. Buchanan – who was seated under the umbrellas. Noah rested his arms on the concrete edge, crossing them and resting his head on his forearm before he peered up at me through lashes still dripping with water.

His eyes were an endless blue, the light from the pool reflecting off them like a tropical dream.

I bit my lip against a smile. “Very much so, Mr. Becker. I never knew you were such a great dancer.”

“Oh, you should see me on the actual dance floor. I can two step and waltz and cha cha with the best of them. And don’t even get me started on what happens when ‘Watermelon Crawl’ comes on.”

“I’m sure it’s quite entertaining,” I mused, still dangling my feet in the cool water.

“When do I get to see your dance moves?”

I barked out a laugh at that. “Um, that would be approximately…never.”

“Never?” he asked, popping his head up off his arms with a look of injustice. “But you’ve seen all my moves, now. I show you mine, you show me yours. Isn’t that the deal?”

“I never agreed to that.”

He narrowed his eyes, running his forefinger and thumb over the stubble on his chin before he nodded. “I see…” Then, a wicked gleam came over those blue steel eyes, and before I could so much as scream, his hand wrapped around my wrist, tugging forward until I was off the ledge and under water.

I popped up instantly, not even able to open my eyes against the chlorine yet before I was swinging at him. “Noah!”

He laughed, catching my advances easily and pulling me into him. I blinked several times, shaking the drops from my eyes before I glared up at him.

“You jerk. Mama’s going to kill me for ruining my hair.”

“Mama will live,” he said, and then one arm wrapped around my waist, the other taking my hand in a leading position. “Now, let’s dance, little lady.”

With one pull of my hand and push of my hip, I spun away from him, reeling back in like a yo-yo and falling in line with his steps before I realized what was happening. Surprise ripped through me, brows shooting up to my hairline as he somehow managed to smoothly twirl me around that metaphorical dance floor even with water hitting us waist deep. My feet felt sluggish, the moves slower than if we were in boots on a hardwood floor, but somehow, that made it even more fun.

I laughed and laughed as he danced me around – until he had the bright idea to flip me like a swing dancer. I emerged from the water beating on his chest again, which just made him laugh harder. And when we were breathless, Noah tugged me to the side of the pool again.

“Thank you for the dance,” he said, both of us still breathing heavily as he wrapped his strong, rugged hands around my waist. For a moment, he just held them there, the rough pad of his thumbs smoothing over my exposed hip bones. My smile fell, chest still heaving as my eyes slipped to his lips.

I didn’t know why I looked at them.

I didn’t know why I couldn’t look away.

Noah swallowed, tightening his grip on my hips before he lowered in the water a little and helped push me back up onto the edge of the pool where I’d been seated before. Once I was steady, he released his hold on me, backing away with a distant look in his eyes that I couldn’t decipher before he tore them from me and looked at Betty, instead.

BlueSeal’s Review of On The Rocks

On The Rocks by Kandi Steiner is the first in a NEW four brother series. Each book will be standalone but each of the Becker brothers will get his own book. I have to tell you…I will be in waiting impatiently for the next book to come out! Grab your Tennessee sipping whiskey and let’s chat about On The Rocks by Kandi Steiner (seriously, grab your whiskey but don’t shoot it…sip it).

Noah Becker is the man that your mother warned you about. He is a whiskey sipping, barrel raising, cocky, notorious trouble-making, hot as sin, player of a man. According to his mother, Noah was handsome enough to make a church choir stutter in unison. Oh my! The last time that Noah saw Ruby Grace Barnett was when she was a freckle-faced kid who used the kick the back of his pew in church. They were 10 years apart in age and played some game in the church that always ended up with Ruby Grace giggling and getting in trouble with her mother. Ruby Grace is only nineteen but based on the sadness in her eyes, she had lost her innocence a long time ago. Ruby Grace wanted the world to see her as a dignified lady but in reality, she was still a nineteen-year-old girl who doesn’t have it it all figured out yet. Is it possible that Noah Becker was the only person who saw Ruby Grace for who she really was?

Ruby Grace is getting married in six weeks to a man who will likely become the President in a few years. Anthony is the type of man that Ruby Grace was groomed for but something feels wrong. She has dreams of finishing college at UNC and working with AmeriCorps but all of that will vanish the moment that she says “I do.” Ruby Grace the dreamer will no longer exist. She will by Ruby Grace the politician’s dutiful wife spending her days hosting luncheons for other political wives and working with charities that will benefit Anthony’s political campaign. Ruby Grace loves Anthony but the words of one of her favorite people, Ms. Betty, keep coming back to her. “Anyone can lead an ordinary life but the best adventures are reserved for the ones brave enough to be extraordinary.” Is Ruby Grace destined to be ordinary?

Kandi Steiner has written an extraordinary book! Don’t worry, no spoiler alert is needed! I laughed, cried, and even slammed my book and threw it across the room. (Well, I wanted to but in reality, I exited the APP and put my e-reader on the bed. The other sounded much more dramatic.) I am in LOVE with Noah Becker and excited to hear that his sexy brothers will also get getting their own books.Â On The Rocks by Kandi Steiner get 5 out of 5 propellers!!

Kandi Steiner is a bestselling author and whiskey connoisseur living in Tampa, FL. Best known for writing “emotional rollercoaster” stories, she loves bringing flawed characters to life and writing about real, raw romance – in all its forms. No two Kandi Steiner books are the same, and if you’re a lover of angsty, emotional, and inspirational reads, she’s your gal.

An alumna of the University of Central Florida, Kandi graduated with a double major in Creative Writing and Advertising/PR with a minor in Women’s Studies. She started writing back in the 4th grade after reading the first Harry Potter installment. In 6th grade, she wrote and edited her own newspaper and distributed to her classmates. Eventually, the principal caught on and the newspaper was quickly halted, though Kandi tried fighting for her “freedom of press.” She took particular interest in writing romance after college, as she has always been a diehard hopeless romantic, and likes to highlight all the challenges of love as well as the triumphs.

When Kandi isn’t writing, you can find her reading books of all kinds, talking with her extremely vocal cat, and spending time with her friends and family. She enjoys live music, traveling, anything heavy in carbs, beach days, movie marathons, craft beer, and sweet wine – not necessarily in that order.

Kandi Steiner may be coming to a city near you! Check out her “events” tab to see all the signings she’s attending in the near future: