Synopsis: Spoiled Princess is what he used to call me.

We were an inferno of hate and passion wound up with a dash of chaos.

For four years I watched him mow my lawn.

For four years I watched my friends make fun of him.

For four years I hated myself for wanting him, but even more for the way I treated him.

And then I had him.

For one night, we put all labels away and I spent the best night of my life in his arms.

Then the next day, with my secret night under lock and key, I looked the other way while my friends shamed him.

But now the jokes on me, because the scrawny lawn boy who I secretly loved from afar is now the director of Hollywood’s most exclusive summer camp.

And I’m on his staff.

Now it’s his turn to punish me.

His turn to make me pay.

His turn to take his revenge after years of humiliation.

He’s no longer a boy you can ridicule.

But a college graduate who can have any woman he wants.

I want him to look at me the way he did that one night we had together, but right now

the look in his eyes tells me he’s going to enjoy having me under him for two straight months.

I don’t know where his hatred ends, his passion begins.

All I know is he wants revenge.

And I’m his lucky target. 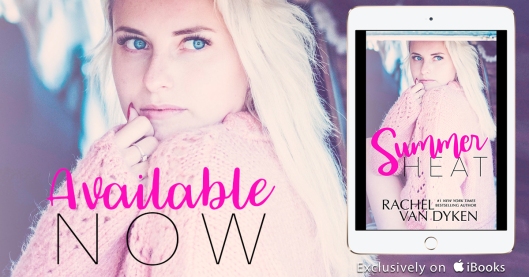 Anyone else now hearing this song in their head?

Marlo and Ray were friends for a brief summer when they were younger. Then labels became important, lines were drawn, and they were firmly separated by those lines. He grew to hate her, vowed to hate her forever after she stole a scholarship he needed desperately in order to escape the life he lived. Now the tables have turned, and he’s her boss. He’s no longer the lanky boy she spent the best night of her life with. He’s hot. He’s successful. And he’s out for revenge.

Summer Heat introduces us to Marlo and Ray, who meet up after four years apart at a prestigious and sought-after summer camp. He’s the boss. She’s part of the staff. He thinks he knew her way back when. She has no idea who he is now. And nothing is as it seems on the surface.

Ray is supposed to be the spoiled princess daughter of two wealthy parents. Marlo was their lawn boy. Each thinks they know the other. Each thinks what they know on the surface is true underneath. Each of them is wrong. But the drama is just beginning to unfold in this story. You feel sorry for Ray, and you want to hate Marlo. Until he begins to see that there’s more to her story than he ever realized. But will that realization come too late? Is the hate too much to overcome? Or is it a fine line between love and hate that these two just might cross? Guess we’ll have to wait for books 2 & 3 to find out!

NICUnurse’s Rating: I give this book 4.5 propellers. It’s Rachel Van Dyken, so the writing pulls you in from page one with a bit of a mystery as to what really went on between these two in the past. Add in loveable secondary characters, hot guys, and summer camp escapades and I wasn’t able to stop reading until “The End”! There IS a bit of a cliffhanger but I hear we won’t have to wait too terribly long for books 2 & 3 so stay tuned for those reviews coming (hopefully!) soon.